The Great Cul-De-Sac Problem And How To Alleviate It

Are you ready to lose faith in humanity? Now, I’m not entirely against suburbs, cul-de-sacs, and curvillinear loop street layouts. I can see why people (myself included) like them and what they find attractive about them. But, things have gotten so out of hand, that the damage they cause never be fixed and is permanant. Still, there something we can do to alleviate their side effects.

Long story short, people wanted to get away from the noisy, chaotic, concrete paved city and headed out into the peaceful green leafy suburbs. Decades later, protectionism, stranger-phobia, “Leave me alone”ism, “I want to have a roundabout where my kids can play street hockey”ism took over and now we have extreme exaggerations of cul-de-sacs and curvilinear loop street layouts. So extreme that they defy all logic, yet have begun to appear everywhere in more and more extreme forms.

Instead of creating more distance between you and your annoying loud neighbors / preventing others from driving through your street, you’re really separating yourself and your kids from your own community who live a frisbee’s throw away from you. You’re preventing your kids from socializing with their friends on a neighboring street.

To put it lightly, overdone cul-de-sacs and curvilinear loop street layouts viciously separate neighbor from neighbor, force people to drive long distances, and astronomically increase the distance from point A to point B. They are illogical. 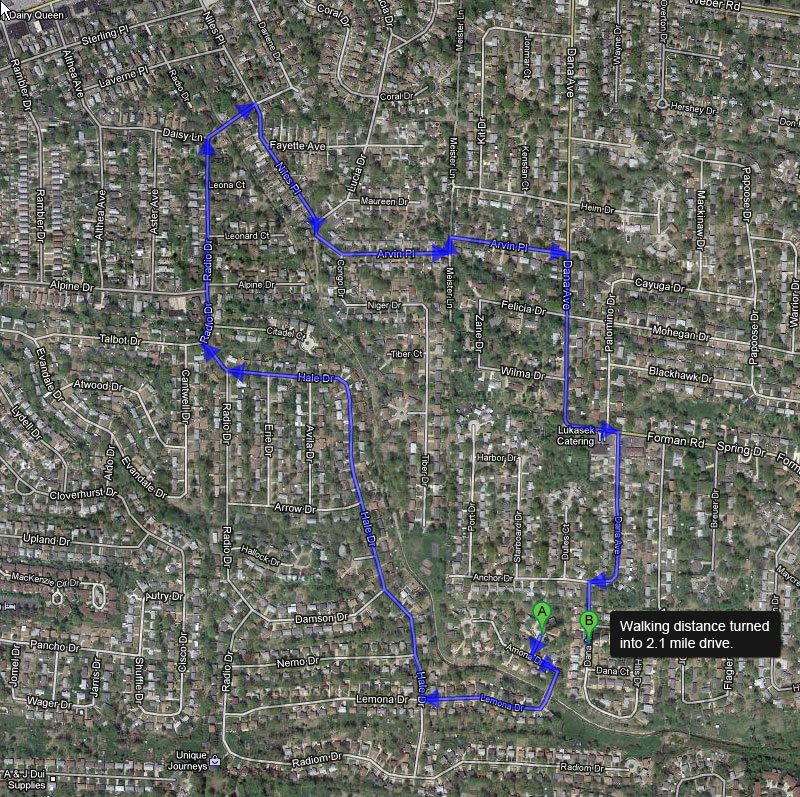 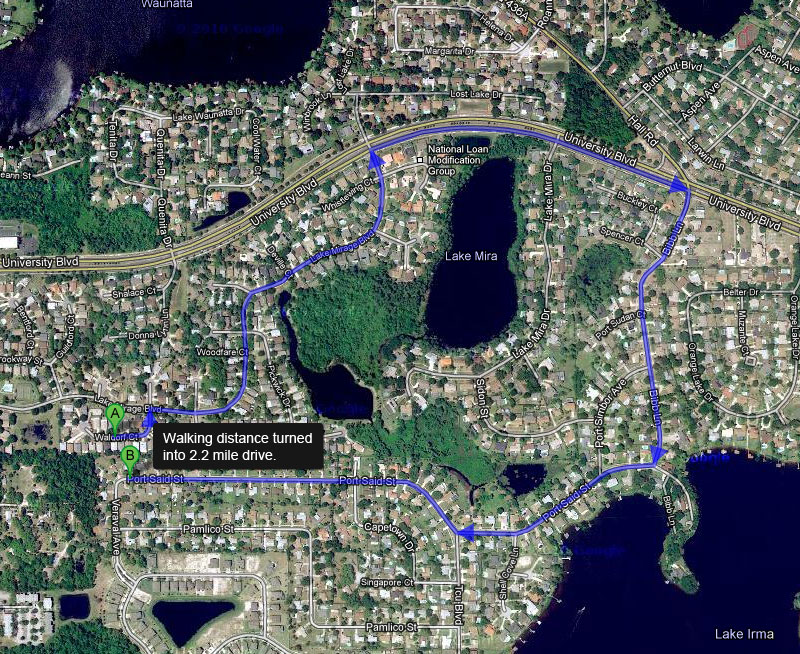 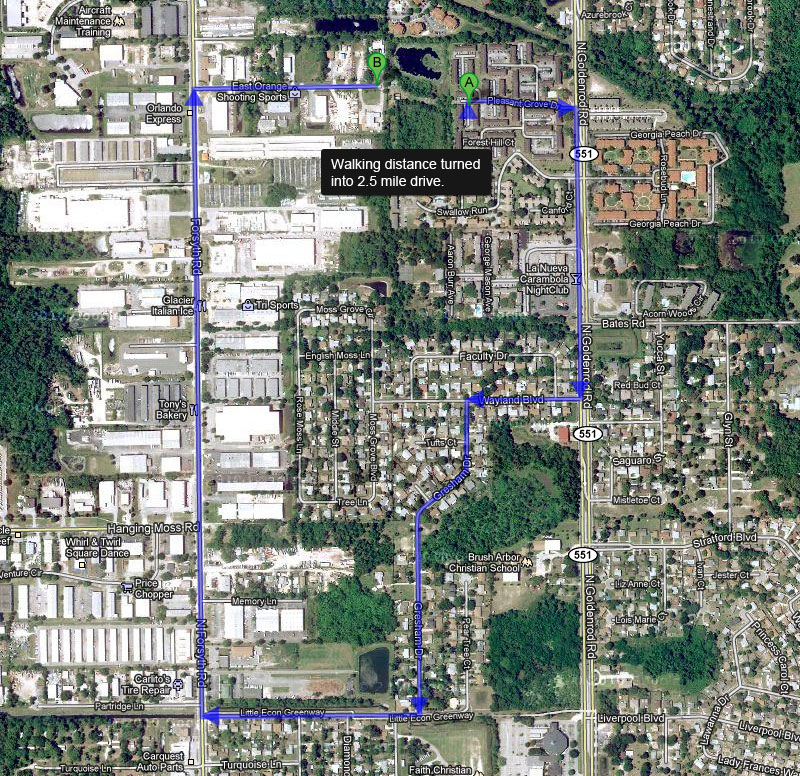 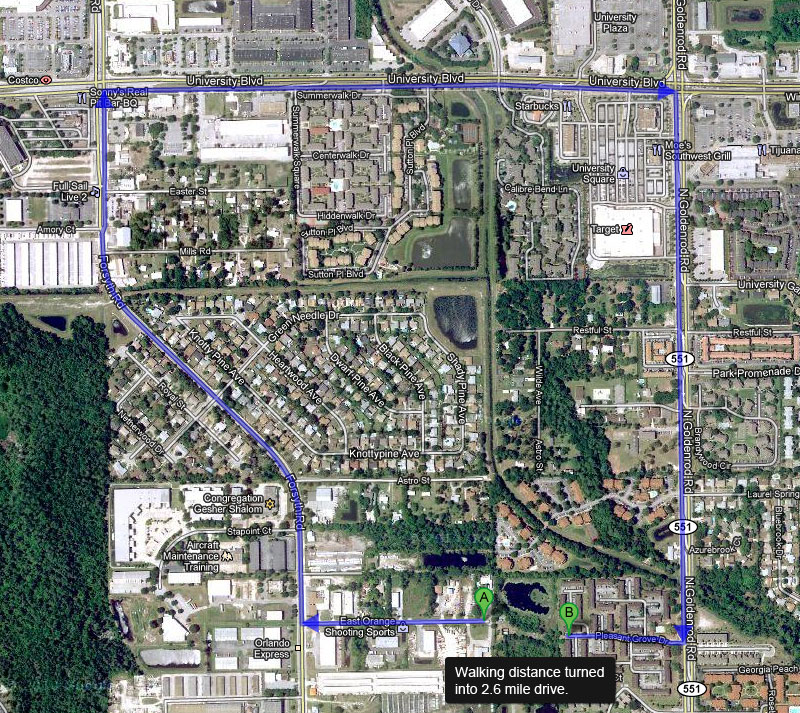 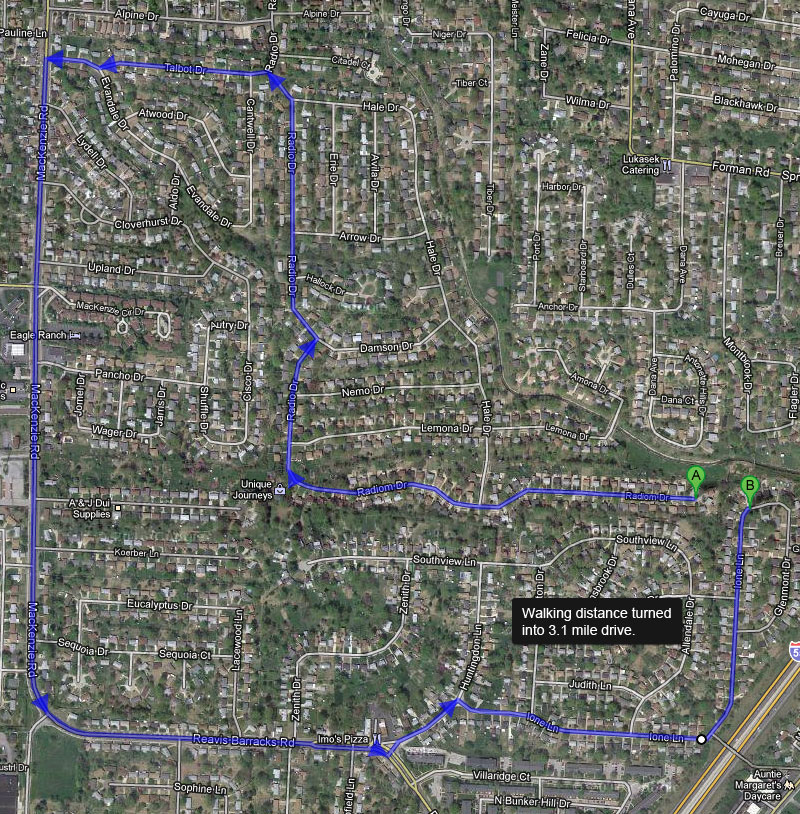 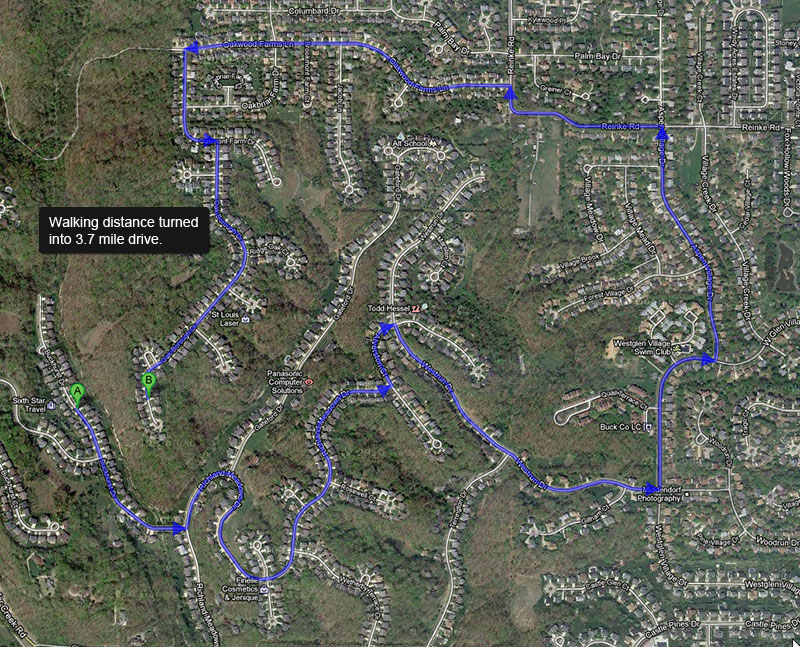 So my brother and I go for a long walk far into our neighborhood, we go down a street that we’ve never really walked down before just to check it out and see where it leads. The street was much busier than any others we’ve seen. We walk and walk and walk and can’t really find an exit from the neighborhood. Long story short it turns out we stumbled into the massive neighborhood pictured below, from which there is no escape. It turns out this neighborhood of 427 homes and thousands of people is completely disconnected from the surrounding neighborhoods and has only ->1<- way in and out. We didn’t believe it until we got home and looked it up on Google maps. 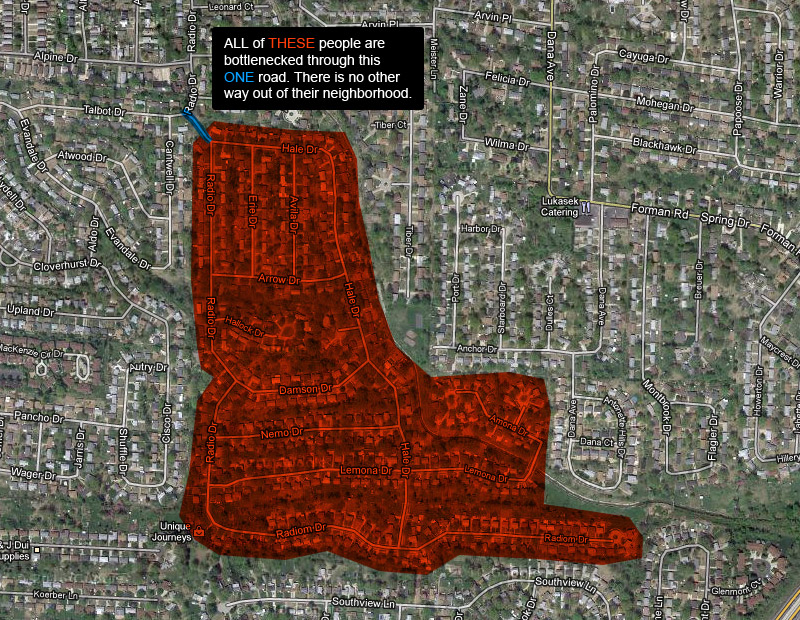 Myth 1: The neighborhood feels so friendly, it really feels like a community.

Nonsense. It isolates people inside their own sterile community. In order to see your neighbors just a few yards away on another street, instead of a 20 second walk, you have to drive for miles in your car just to get to them. These street layouts don’t bring people closer, they tear them apart viciously and create a culture of “leave me alone”. Personally, every time I drive through curvilinear loop / cul-de-sac neighborhoods I never see anyone out socializing, as soon as I hit the city though, where a grid based street layout is used, I see kids playing and neighbors outside talking. (And drug dealers’ assistants outside looking out for police, but that’s another story)

Are you on crack? The entire neighborhood gets bottlenecked into 1 or 2 streets in order to enter and leave their community. Cul-de-sacs / curvilinear loops give a few people living in roundabouts a peaceful street for their kids while everyone else living along “collector roads” have to put up with hundreds of drivers hauling ass past their house during morning and evening rush hour.

Myth 3: But it’s less densely populated and look at all these trees, there’s less air pollution.

Bullshit. Car fumes give off carbon dioxide AND pollutants. The trees will only help with the carbon dioxide. Your family, who lives on a collector road are still breathing in the pollutants of hundreds of cars driving past your house because there’s no other way out of the neighborhood.

Not to mention using more gas increases dependence on foreign oil and the amount of American dollars flowing out of the US. Which makes it kind of ironic to see American flags on so many of these homes. Not that the residents are solely to blame, it’s also the construction companies at fault here. All of this can be fixed by adding more connecting roads and providing more entrances into the neighborhood. Then again, would residents allow this?

Myth 4: I feel nice and safe tucked away in a cul-de-sac / curvilinear loop neighborhood.

The truth is, it takes the police, fire, and ambulance longer to get to your house. Anyone that’s ever been in an emergency situation knows that every second counts. And man do you loose a lot of seconds driving through miles and miles of road just to reach someone a few yards away.

The roads and homes are already built and they’re not going anywhere. They’re stuck with that layout permanently. But we can still alleviate the anti-social element of cul-de-sacs and reconnect neighbors by putting in strategicly placed sidewalks and paths to better connect neighbors and encourage walking, biking, and socializing. 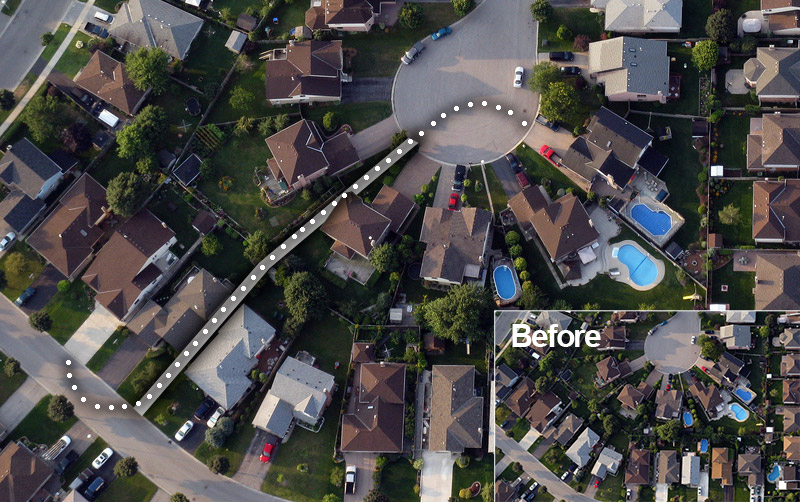 Here’s how we would alleviate the isolation of our extreme cul-de-sac neighborhoods. 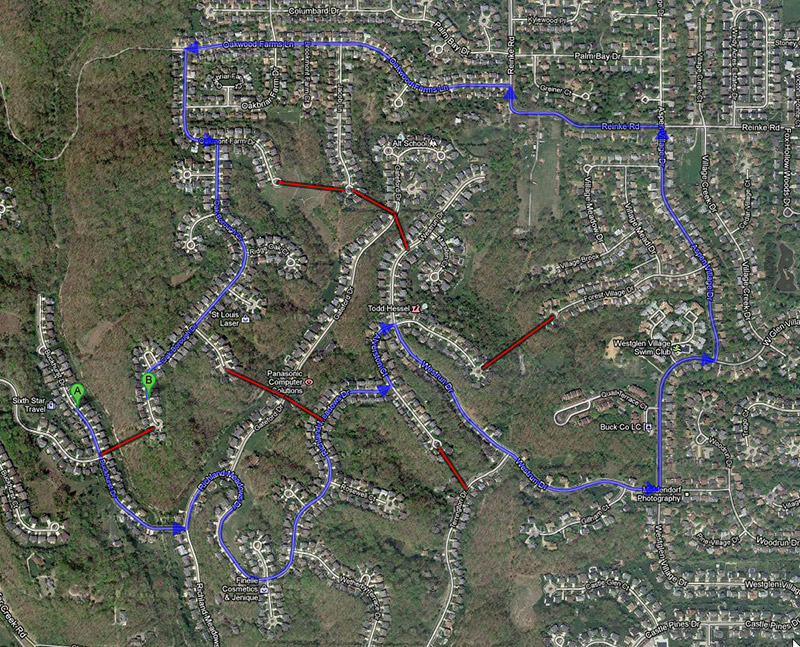 Obviously, the logical thing to do would be to build a few roads connecting all these dead end streets. However….

Would residents of cul-de-sacs and isolated neighborhoods ever approve such plans to add extra roads or connecting sidewalks?

I printed out 30 surveys asking residents if they would be for or against more “connector roads” being added to their neighborhood and just finished taping them to people’s doors. I HAVE to know now, are these street layouts being requested by residents or forced upon residents by misguided street planners and construction companies? Do people want more ways in and out of their neighborhood or are they mentally trapped in their own “leave me alone” mentality? 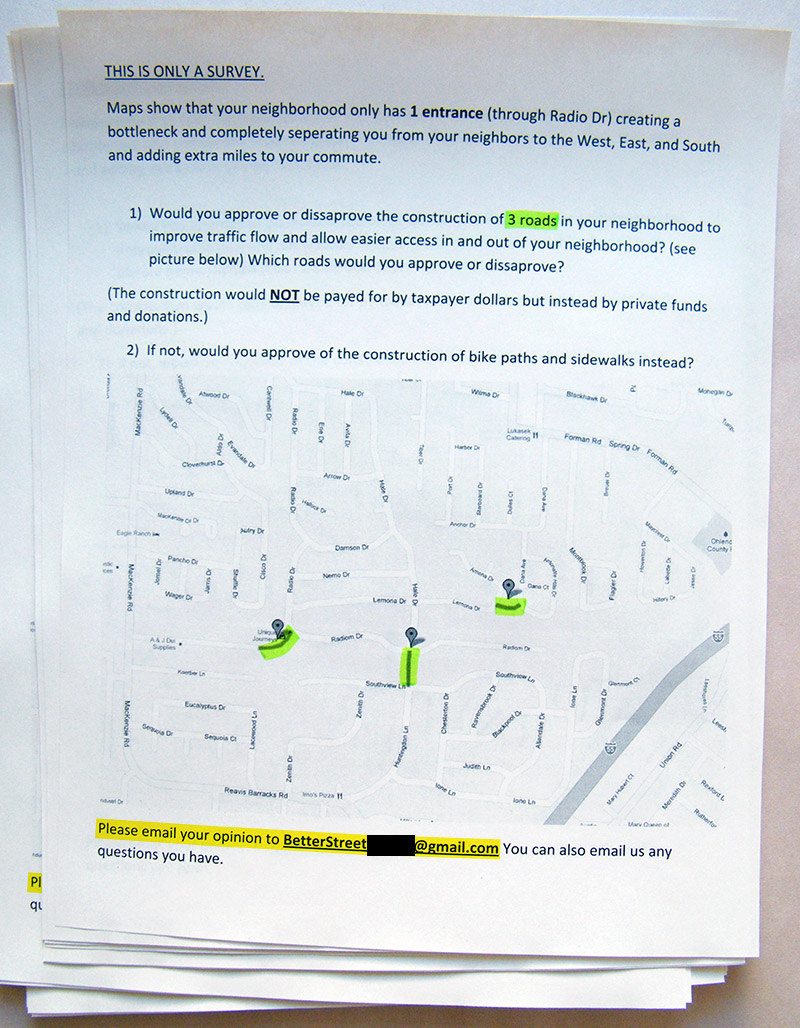 I posted 15 surveys on homes near the entrance of the only road into the isolated neighborhood and the other 15 on the homes that are near the 3 “suggested roads” at the bottom of the neighborhood. I wonder if the two groups will respond differently…

I’ll keep the 2 people who actually read this article updated on how residents respond to the surveys. I’d say give it a month. Come back here November for the results.

November 2, 2011 Update:
Only 5 people emailed me back out of the 30 surveys I posted on people’s doors. So I went out in person and asked 3 people in their front yards. Overall, the results where interesting, but predictable. People living in the further cul-de-sacs and isolated roads love the non existent traffic but don’t realize THEY are causing increased traffic for someone else. Those living near the streets that connect to the only road out do not like the traffic and would like more roads in and out of the neighborhood. Everyone else opposed more roads and held on tightly to their “leave me alone” mentality. Pretty much everyone was open to the idea of bike paths though.

Only 3 residents supported extra roads, with one woman who lives on the only street out of the neighborhood of 400+ residents emailing me with “traffic is a big headache. It would be safer for our children and grandchildren [if we had more roads in and out]” and another chimed in with “I am in favor of any improvement that could be made.  The traffic and speeding in this neighborhood is ridiculous. The streets need to be safe for all children living in this neighborhood the idea of bike paths or sidewalks is a great idea also.“

They are NOT exaggerating their claims. While I was posting the surveys I noticed constant high speed traffic along the roads that residents use to get in and out. Everyone was hauling ass. Basically, residents were bitching that they don’t want new roads because they want quiet streets for their children yet those very same people would haul ass past the homes where other people’s children play. Yeah, there’s humanity for you. Ignorant till the end.

Those who opposed new roads mentioned their fear of increased crime and increased traffic, completely ignoring the fact that they themselves are causing massive amounts of traffic and noise for their neighbors living near the outlet roads.

City planners listen carefully: Once you build cul-de-sacs they will STAY cul-de-sacs forever. There is no fixing them once they’re put in. Residents won’t allow it. So when you lay out streets, do it right the first time because there are no second chances. Cul-de-sacs give a few residents peace, quiet, and safety at the cost of everyone else, and I don’t think that’s fair.

From reading the comments on hacker news and a few here, I think in my attempt to bust out this article quickly I failed to emphasize that I do NOT think that ALL cul-de-sac and curvilinear loop neighborhoods are bad. I myself live in a very moderate one, just a block and a half away from a major road. I am against EXTREME and OVERDONE versions of these street designs. I would HATE living in a grid street design (for reasons I’ll cover in my next article). This is about isolationist and protectionist culture taken to such extreme levels that they are illogical.

Credits:
– Cul-de-sac photo (©) used in featured image on blog homepage by Ian Lockwood.
– Cul-de-sac neighborhood photo (©) used above (with before picture in corner) by Stephanie Keating.
All copyrighted photos used under fair use for non-commercial, educational and informational purposes.